do not get trapped underground

Your shelter needs at least two exits (three is better).

The key factors for emergency egress:

Bomb shelters are the last thing people (should) admit they own so you cannot count on your friendly neighbor performing a welfare check. You must have an emergency egress portal. There are many scenarios where you can become trapped in your shelter:

Note that some blast doors have a self-rescue capability where the door leaf can be unbolted from the hinges. This is useful if the hinges or latches bind during a ground shock event, but that just covers the first two situations above. The other five will require another way out. This is a 30 year old concrete blast door made in Switzerland with the tools to remove the latches painted yellow and secured to the inside of the door: 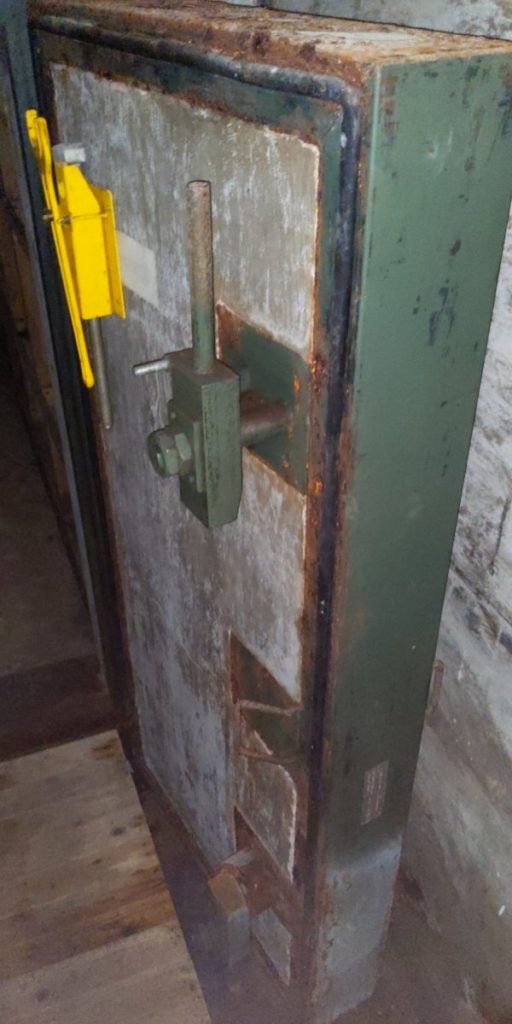 Most shelters will have a primary blast door that will take most of the traffic. This door should be sized to move large objects through it. A 36 inch (about one meter) width will allow large objects to be moved in and out. Refrigerators and couches get moved through 36 inch wide external doorways all of the time.

A good analogy of a bomb shelter is a submarine. Let’s call our underground shelter a “subterra” (under the ground). It’s a subterranean vessel that contains all of the things necessary to sustain life. And just like a submarine, it must be filled with stores through portals that are too small to drive a forklift through. A hand truck (dolly) should be considered a vital piece of shelter equipment. Loading food and other stores through a small hatch onto a submarine is a group effort: 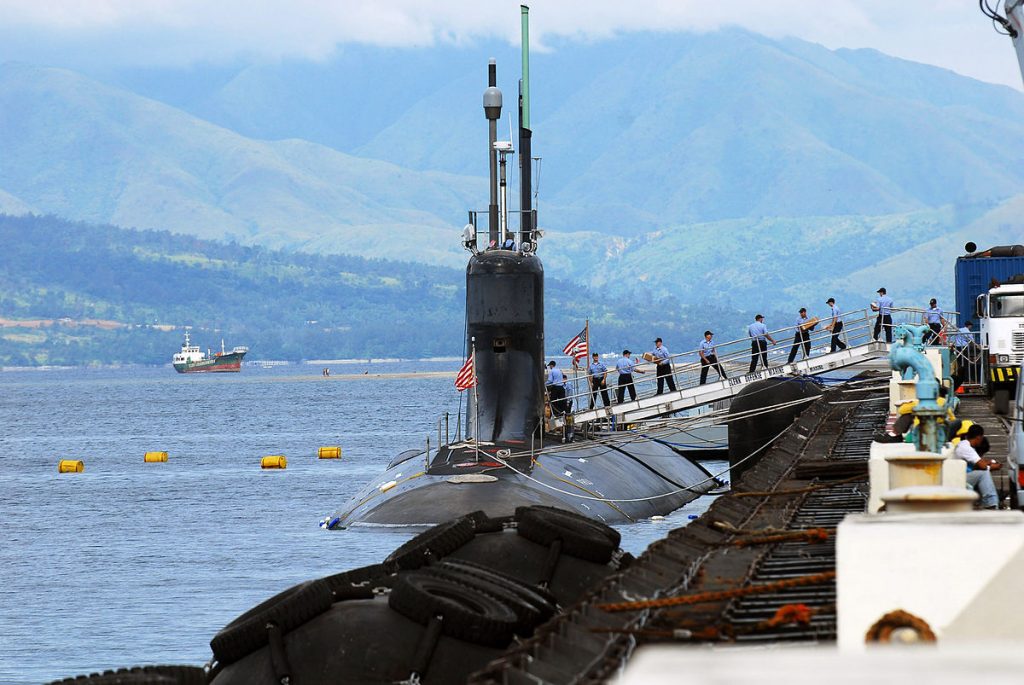 Placement of the emergency egress portal

If you have a blast door on your shelter, the emergency egress should be a hatch. Hatches are horizontal when shut and open upward. This will put the second exit penetrating the ceiling. This will lessen the chances for debris impeding the openings of both exits during an event that scatters debris. But if you have to put a second blast door on the same wall as the primary one because there is no other access to the surface, then put it there. Having a second way out of your shelter is mandatory.

If you are going to install a hatch through the ceiling of your shelter, let’s have some landscaping give the outside hatch access some cover. Cover is something that stops rifle bullets. You are preparing the battlespace before the battle against malicious people so that you will prevail. A better option is to install a culvert or a tunnel away from the shelter to a hidden location that can surveil the main entrance. No matter where your shelter is, there should be a plan for dealing with people on your property. Detection, surveillance, communication, and interaction with people outside your shelter will be covered in a future article.

Bomb shelter doors can be mounted to swing inward or outward. If the top end of your threat matrix is a nuclear detonation, you need a blast door that swings outward. This allows the door to bridge the frame opening and take the blast in the seated condition. The door will seat against the frame when hit with the positive phase of a blast.

Most blast door specifications call for a minimum of 50% rebound load. Blast doors store energy like a spring and when the positive phase of the blast hits an outward swinging door, it seats against the frame, stores energy, and then rebounds away from the frame. The hinges and latches resist this rebound response.

If the thing that will kill you first is a malicious person or a severe weather event, an inward swinging door becomes attractive. It’s not impossible, but you are not likely to be trapped in your shelter behind a door that opens into your shelter. But you will lose up to half of the blast rating of the door.

Communication with the outside

If you are stuck in a shelter with no way out, you will die in there. If you have a surveillance system and you know there is someone outside your shelter, you have nothing to lose, even if they are malicious. You should have a pass through next to your main door. A pass through is a small door that you can pass items like cell phones, keys, money, and ammunition through. It allows you to interact with people outside your shelter without letting them in. One type of interaction is persuading them to leave your property by shooting at them. Not having a pass through is number five on the list in the article on common mistakes when building a shelter. But if you missed that article and do not have a pass through, you can try communicating (yelling) through one of the ventilation pipes. You will have to remove the blast valve from the wall to have a chance of someone hearing you. The proper tools to do this should be staged inside your shelter.

A simple way to communicate with someone directly outside your shelter is an automotive loudspeaker. They have a hardwired speaker connected to a control box on the inside. You will need to run the speaker wire through a properly sized conduit. You want it as small as possible and then seal it up with closed cell spray foam. Better yet, put a couple of 45 or 90 degree fitting in it so the inside is offset from the outside – and then seal it with foam. Below are links to what you will need.

Full disclosure: as an Amazon Associate I earn from qualifying purchases. The convenient links below will take you directly to the items on Amazon and help support this website. Thank you very much!

From best to not-so-best. The only “worst” option is no second exit.

Best option – a blast hatch or a second blast door

Either of these is the best option to increase your chances of safely exiting your shelter.  The protocol for testing a door or a hatch is:

Doors and hatches should be tested at least bi-annually when you test your NBC air filtration system.

These are inward swinging hatches or doors that have a column of sand to the surface above them. They are meant to be used as a last resort so the lid is held in place with bolts that have to be removed manually. They will either have hinges or just chain tethers that keep the steel lid from dropping to the floor. The sand column above it allows for easier digging to the surface because sand has less adhesion than packed earth. Most of the sand will end up inside the shelter.

Whether or not they are on the ceiling or the wall, the column of sand will exert a static load on the inward swinging door. This can make removing the bolts dangerous. A 24 x 24 x 36 inch (610 x 610 x 915 mm) column of wet sand can weigh 1,500 pounds (680 kg). This much weight bearing against a steel plate has a significant energy potential. A ceiling mounted escape hatch requires you to be underneath it when removing the bolts. You must have the proper tools. A ratcheting socket wrench tethered to the frame of this hatch is recommended.

Note that the sand column should have landscaping fabric above it on the surface. It’s much easier to cut landscape fabric with a pocketknife than cut your way through a thick layer of sod because grass took root right above your escape path. Sod is a formidable barrier when you are working above ground and can use your weight as leverage with a pick and shove. It’s much worse when you are underneath it working overhead.

This is another option for concrete shelters. It barely makes the recommended list due to the effort required to breach the wall. It is only suitable for use in a wall, not the ceiling. The sand column is used as described above, but there is no hatch. You need to be able to swing a pick and a hammer at the egress location in the wall.

A section of wall is left devoid of rebar with the sand column going from just outside of it to the surface. A pick, a 60 inch (1.5 meter) pry bar, a sledge hammer, a large chisel, a couple of sizes of shovels, and a pair of (very important) work gloves are kept in the shelter. If you become trapped, you dig for the surface. Unless you are used to manual labor, the physical effort required is enormous. Either of the other two options are significantly less work. But you do have a fighting chance of getting out alive. Steel rebar set in concrete is a formidable barrier.

In order to ensure the structural integrity of the wall, a narrow opening is preferable. A 24 inch (610 m) wide x 36 inch tall (915 mm) tall rebar void is suitable. The shelter wall carries the static loads of the concrete ceiling and the backfilled earth as well as any dynamic blast loads down to the floor slab and footer. A steel header is recommended. A header is a beam that is mounted directly above a non-structural part of a wall like a door or a window. The load comes from the top of the opening and the forces coming down the wall must be routed around the opening in the wall. In this case, we are just removing the reinforcing steel in the wall. That creates a weak point that could fail so steel beam is used to prevent the wall from a structural failure.

Being trapped in your shelter is preventable. Installing an emergency egress point needs to happen when the shelter is built. To be very clear: do not build or purchase a shelter without a second way out.

Next article: Common terms and definitions about shelters At Amazon: Best Sellers in Safety and Security Full disclosure: as an Amazon Associate I earn from qualifying purchases. The convenient links below will take you directly to the items on Amazon and help support this website. Thank you very much!